Ultrasound Berth in the Roentgen Museum 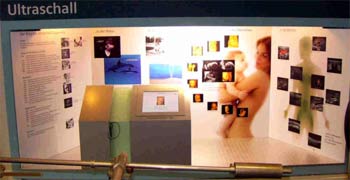 Since June 2005 a window-display, the so called berth, forms the center of the Ultrasound exhibitions. In the opening ceremony approximately 70 physicians were moved by the festive lecture by Professor Hans-Juergen Hollaender, the first physician ever to work clinically with real-time ultrasound – the Siemens Vidoson.  Also present was Richard Soldner, the engineer who developed the Vidoson in 1965. Ulrich Hennig, director of the Roentgen Museum pointed out the increasing importance of imaging techniques; therefore ultrasound would perfectly complement the conception of the Roentgen Museum. A quiz on more than 25 year old ultrasound pictures concluded the ceremony.

The ultrasound berth is nearly 3 m wide. It presents a brief outline of ultrasound in nature and on the technical developments, also displaying the prenatal human development. Visitors may get additional information on the origin and development of ultrasound and on medical applications by using a touchscreen monitor. An ultrasound Doppler-probe gives an idea of how the circulating blood in a vessel “sounds”.