The modern technical use of ultrasound began at the beginning of the 20th century, stimulated by the sinking of the Titanic in 1912, and with the idea of being able to detect obstacles underwater using ultrasound. The German Alexander Behm and the Englishman Lewis Richardson developed approximately simultaneously and independently from each other, an echo sounder... [more]

(museum of the German society of ultrasound in medicine) 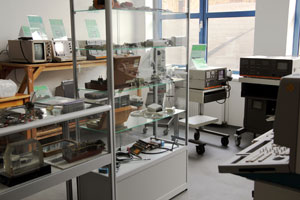 It has been less than 60 years since the introduction of ultrasound diagnostics into clinical routine with a breakthrough for rapid further technological development only about 35 years ago. It may seem paradoxical to set up a museum for such a young scientific discipline. On the other hand ultrasound technology is today the most often used imaging technique in medicine worldwide; it was a medical stroke of luck: Ultrasound made it possible to display organs, entire body areas, and functional processes without the threat of dangerous radiation, while keeping the patients’ stress level to a minimum. Although only 35 years have passed since the beginning of its widespread clinical use, it was difficult to trace the first commercially available scanners, to acquire them and to put them back into working order. In 1993 the Museum Society was founded in the city of Halle/Saale as a subdivision of the German Society of Ultrasound in Medicine. In 1994 an agreement was concluded with the German Museum of Hygiene in Dresden to integrate the ultrasound collection there. 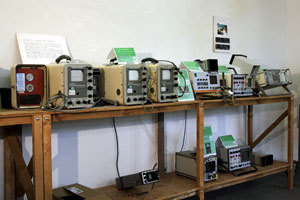 In 1995 the opening ceremony in Dresden was attended by more than 1000 participants, many of which were pioneers in the area of ultrasound and shared their valuable experiences with the audience. Unfortunately, the course of time changed the Hygiene Museum’s area of responsibility and the contract with the Ultrasound Museum was terminated.

The Ultrasound Museum found a new and – hopefully – final location at the Roentgen-Museum in Lennep/Remscheid near the city of Wuppertal, where the exhibition has been stored and displayed since 2002. In 2005 there was an opening ceremony for a window display, the so called berth, within the walls of the Roentgen Museum.